Did my laundry, received fax from Jim Gilbreath and filled out the form and mailed it, resupplied and headed back north the short distance to Missoula to see the Fort Missoula Historical Museum. 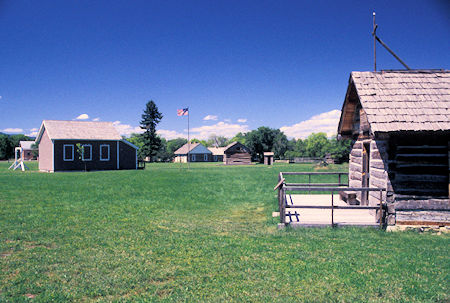 The Fort was one of the early Army Forts in support of settlers and its soldiers were involved in the Indian wars of the area.

It has also served as an internment camp for Italian Sailors and Japanese Americans during World War Two.

It is now a historical frontier museum, National Guard center, Military Reserve center, BLM and USFS offices, etc. It was an interesting place with lots of history.

I then drove south on US 93 to the Lee Metcalf Wildlife Refuge where I was able to take some pictures of two kinds of ducks and some kind of a heron. At first I thought the heron might be a dummy bird placed to attract the real thing since it didn't move at all.

I was later told that the herons often DID just stay still for long periods. Also saw a deer.

Continued south to Stevensville to see St. Mary's Mission. There was a wedding going on and I was too late for the tour so headed out to nearby Charles Waters USFS campground for the night. 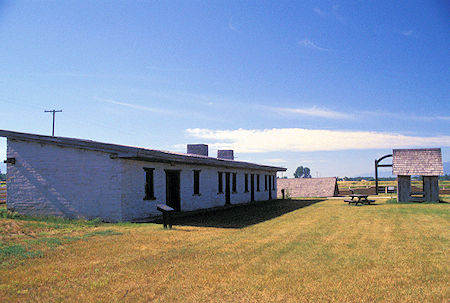 Returned to Stevensville, first stopping at Fort Owen State Park. This is a small park with some of the buildings from an early trading post and civilian fort that operated when settlers first came to the Bitterroot Valley. The original St. Mary's Mission was built at this location and later destroyed.

Fort Owen State Park is the site of many "firsts" in Montana history and is listed on the National Register of Historic Places.

It was home to Montana's first Catholic church founded by Father DeSmet in 1841, and the state's first permanent white settlement.

Major John Owen arrived in the Bitterroot Valley in 1850 and established the fort and began trading with the Indians and the growing number of immigrants.

Period furnishings and artifacts are displayed in the restored rooms of the east barracks.

Fort Owen State Park is one acre in size and sits at an elevation of 3,398 feet. 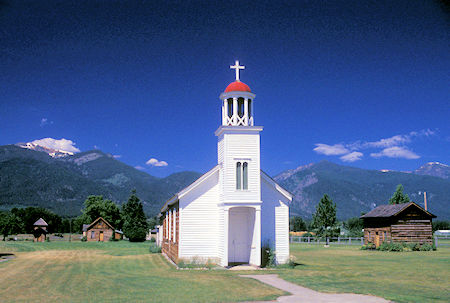 On to St. Mary's Mission where I - for the second time on this trip - had a tour guide all to myself. She was about 70 and had a real knowledge of the local history which she related while showing me the buildings.

It seems the local Flathead Indians had been visited by some Iroquois from back east who related how the "Black Robes" - catholic missionaries - had helped them improve life.

The first two delegations were unsuccessful because no people were available. 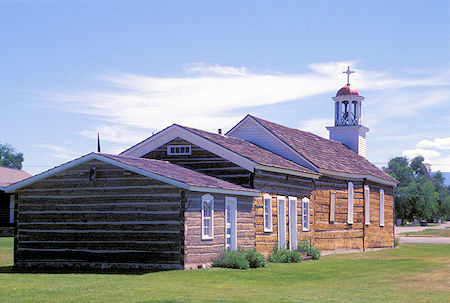 The Black Robes were in and out of the Bitterroot Valley several times over a period of years but they had a positive influence on the Flatheads. They introduced crops such as grains for both food and animal feed - and garden vegetables.

The Flatheads didn't want to have anything to do with things like lettuce - anything green and leafy was for horses!

Very interesting history that tied in with some of the places I had visited earlier. 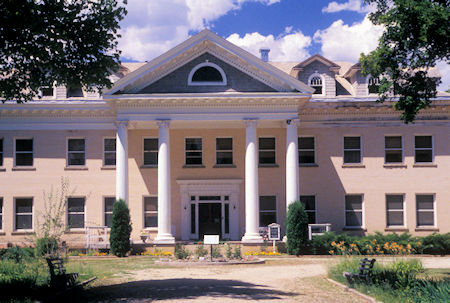 Marcus Daly was a colorful mining tycoon known as the "Copper King." An industrious Irish immigrant, Daly (1841-1900) made his immense fortune in the mines of Butte during the 1880s, and created the Anaconda Mining Company.

Daly established the towns of Anaconda, to boost his smelt mines, and Hamilton, to strengthen his lumber industry.

Daly became a citizen of the United States in 1874. The Walker Brothers, friends of his in New York who owned a banking and mining business group, sent Daly to the Montana Territory in 1876 to find and invest in silver mining operations.

After buying and selling interests in dozens of mining properties, Daly purchased a certain silver mine claim that unexpectedly gushed forth an effusive copper vein.

Understanding there could be a gigantic profit in copper if related smelting costs could be lessened, Daly saw a golden opportunity for prosperity. With strong financial backing from associates, he built a smelter on a site twenty-eight miles west of Butte (now known as Anaconda).

By the mid-1880s, the copper mines of Butte were producing over seventeen million dollars worth of metallic elements a year, and Daly, although a junior partner in the Anaconda investment, became a very wealthy fellow.

In the late 1880s, Daly built a summer residence for his family in present-day Hamilton, the center of the marvelous Bitterroot Valley. Daly purchased the existing Anthony Chaffin homestead in 1886, including the farmhouse, and had it completely remodeled into a majestic Queen Anne style Victorian mansion. To this day, the manor remains a riveting symbol of abundant wealth and lavish adornment.

The Daly Mansion, also known as "Riverside," due to its closeness to the Bitterroot River, served to entertain and delight guests. Foreign plants, a swimming pool, and a children's playhouse were all added to Riverside after the Daly family arrived.

Marcus Daly, a blunt and reclusive man, had a tremendous love for horse racing, and came to the Bitterroot Valley for two compelling reasons: to purchase enormous acreage for timber and to establish a breeding homestead for thoroughbreds.

The Copper King eventually obtained several large ranches and farms. While Daly lived, 1,200 head of horses were kept on the 22,000-acre holding he named the Bitterroot Stock Farm.

During the late 1880s, Daly bought up little sawmills in the surrounding areas and very quickly established a lumber producing industry on the grounds beside the Bitterroot River.

Marcus Daly's next big idea was to bring in a pair of men from out-of-state to design and develop his fantasy town. They were James Hamilton and Robert O'Hara, who arrived from Minnesota in 1890. The town was named after Hamilton, and O'Hara was the first mayor. Daly's planned community had a bank, stores, shops, a school, and four churches. Hamilton was incorporated about 1894.

Margaret Daly (1853-1941) took an executive role in the daily operations of the Bitterroot Stock Farm. She hired dependable, efficient employees, and was known to be quite the entertainer. Dinners at the home were always formal, and after most evening meals, coffee was served on the sun porch.

Mrs. Daly would gather the children around her right before bedtime and read stories to them in the sitting room.

Mrs. Daly also had a philanthropic streak measuring a yard wide and a foot deep. She helped the Boy Scouts financially, enabling them to bring about the first scout camp in the Skalkaho area.

She also donated land for the area's first library to be constructed, and in memory of her husband, built the Marcus Daly Memorial Hospital.

After Marcus Daly's death in 1900, Margaret had the home remodeled into the present structure. The Georgian Revival style Mansion was drafted by noted Missoula architect A.J. Gibson and finished in 1910.

The building occupies 24,000 square feet on three floors, with twenty five bedrooms, fifteen bathrooms, and seven fireplaces, five of which are faced with imported Italian marble.

Some of the primary rooms include a broad living room, a formal dining room, a music room, a sun room,an upstairs sitting room, a third floor billiard hall, and a trophy room which was annexed in 1914.

Mansion grounds showcase fifty species of trees, a tennis court, a greenhouse, a boathouse, and a laundry building.

Following Mrs. Daly's death in 1941, her elegant abode was boarded up until 1987, when it was opened to the public.

The Daly Mansion, recognized as a National Historic Site, is owned by the State of Montana, and operated and maintained by the Daly Mansion Preservation Trust. Arguably, the comeliest and most historically significant structure in the Bitterroot, the residence provides a supremely revealing and reminding glimpse of bygone times and the contrasting days of yesteryear.

I proceeded east on Montana 38 and stopped at the Black Bear USFS campground.