I returned to Deer Lodge and the Grant-Kohrs Ranch National Historic Site run by the National Park Service. This was the headquarters for an early ranching operation that once grazed cattle on 10 million acres of open range in several States and Canada. A lot of the history here tied in with the earlier places I had visited. 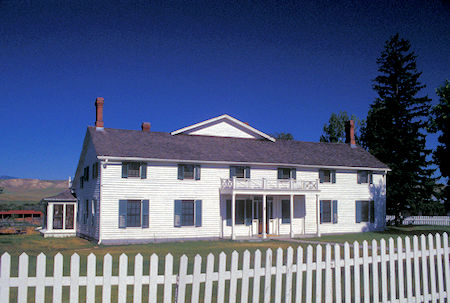 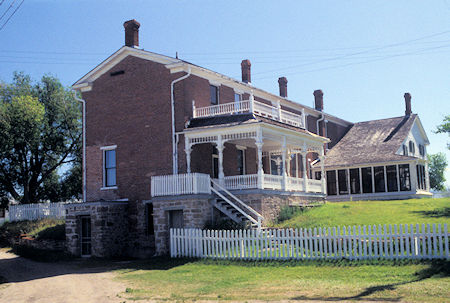 The present ranch is small but is operated to retain the old west flavor including some bighorn cattle and old style haying operations. A number of buildings have been preserved which include a lot of vintage stuff like wagons and harness, etc.

The ranch was created and owned by Grant for about four years then Kohr took over. Kohr's wife had a feel of their importance in history and took pains to preserve all the records and the furnishings.

The main ranch house is well preserved. It was once a trading post that has been added onto as the owners became more prosperous.

The house has almost all the original furniture including wallpaper, etc. It is very impressive and interesting.

Had an interesting guide who is a college professor in Wisconsin in the winter. His home, however is in Bozeman, MT. Interesting fellow who grew up in Colorado apparently on a ranch. 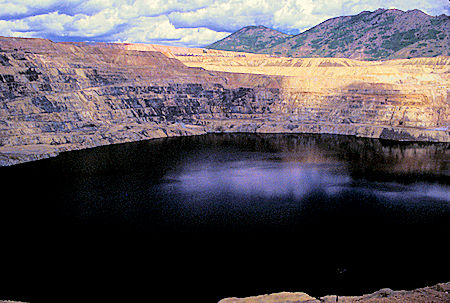 Continued on via I 90 to Butte, Montana where I visited the Berkeley Pit - the giant open pit Anaconda copper mine that was closed in 1982.

The Berkely Pit, started in 1955, was a large truck-operated open-pit copper mine until mining ceased in 1982. By 1980 nearly 1.5 billion tons of material had been removed from the Pit, including more than 290 million tons of copper ore. The pit enabled Butte to claim the title The Richest Hill on Earth.

Two communities and much of Butte's previously crowded East Side were consumed by land purchases to create the pit. The Anaconda Mining Company bought the homes, businesses and school of the working-class communities of Meaderville and McQueen, east of the pit site.

The pit is 7,000 feet long, 5,600 feet wide and 1,600 feet deep from the high wall on the north side just below the Kelley mine. Present day visitors can view the mine from a platform located above it. The viewing stand offers a look at the Berkeley Pit, which is filling with water.

Butte is an interesting town and much of the old mining buildings and stuff is preserved. Attempts are being made at restoration in the old downtown area.

At the very heart of Southwest Montana, Butte was once the throbbing heart of the American West. The largest city west of the Mississippi at the end of the 19th century, and often called the "Richest Hill on Earth," Butte's complex history passes through all the stages of a mining town.

Today, Butte boasts one of the nation's largest National Historic Landmark Districts with over four thousand structures around the city. The history hungry can take a ride on the Old Trolley No. 1 for tours of historic sites, or visit one of Butte's many museums: the Copper King Mansion, the Mai Wah in the heart of Butte's old Chinatown, the Dumas Victorian Brothel Museum in the once notorious Venus Alley, the Mineral Museum, and the World Museum of Mining with its twenty two acres of outdoor and indoor displays.

Our Lady of the Rockies, a 90-foot statue of the Virgin Mary that looks down on Butte from the Continental Divide. 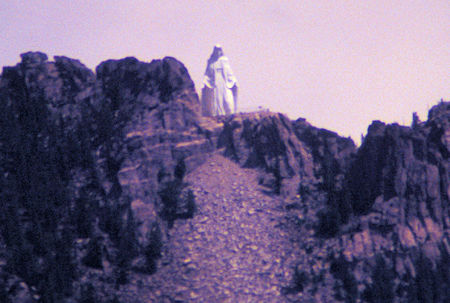 Our Lady of the Rockies, a 90-foot statue of the Virgin Mary that looks down on Butte from the Continental Divide. 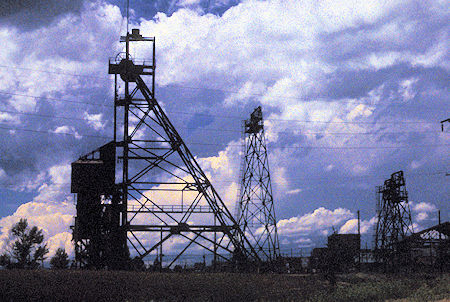 I took the walking tour in the historic downtown and then went to the Anselmo Mine Yard where the mine and surface structures are now owned by the Butte-Silver Bow County, which is working toward making the mine part of a Regional Heritage Park. It is open to the public complete with a free guided tour.

The Anselmo Mine operated from 1887 to 1959, and is 4,301 feet deep. The mineyard is the most intact of any in Butte, and includes the main hoist engine room, an auxiliary (chippy) hoist building (with a lamp room in the lower level), carpenter shop, timekeeper's offices, hose house, the dry, and a warehouse in addition to the headframe with its tipple and two idler towers.

The compressed air tank also survives. Inside, tools and other artifacts are found in place, just as they were when the mine was operating. The Anselmo was an important lead-zinc mine. It also produced silver and copper.

A monster thunderstorm and then general rainstorm moved in about this time with lightning flashing all over the place.

I drove around some of old Butte and then out to the World Museum of Mining next to Highlands College of Montana Tech.

This is located at the surface facilities for the Orphan Girl Mine and includes the hoist building and head frame. 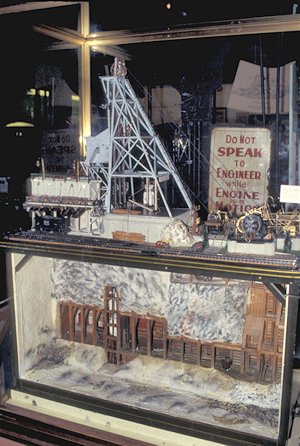 Model of a Mine, World Museum of Mining, Butte, Montana 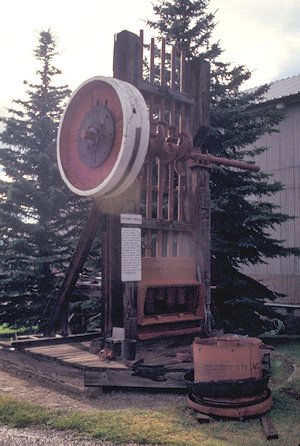 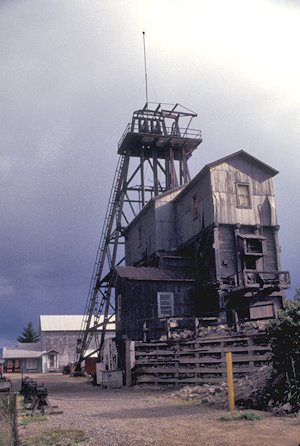 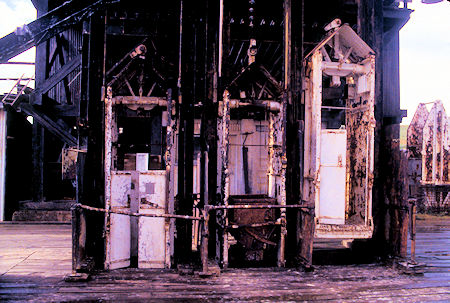 Hoist Cars for Orphan Girl Mine. Car on right was for people only, other cars for ore and mules, World Museum of Mining 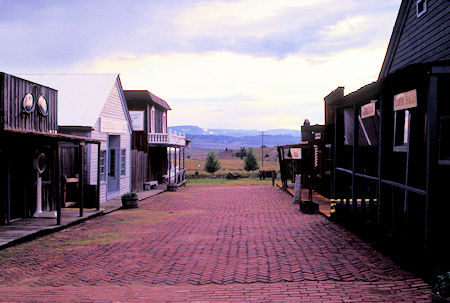 They have also assembled a complete mining town here that they call Hell Roaring Gulch.

It is set up with streets and appropriate displays inside the buildings - dentist - stores - Chinese laundry - etc. etc.

Very well done and interesting - complete with a printed guide.

It was raining when I got there so I started with the town since I could go inside part of the time.

Also saw some almost pet rabbits who live in the area.

Some displays in the hoist house included a player piano which I put my 50 cents in to hear.

Bought a cassette tape of 20 songs played on the piano.

UPDATE 2013: From viewing the website it can be seen that the World Museum of Mining has added much to their exhibits and information since I visited in 1997.

Headed out to the Lowland USFS campground for the night. Had the whole place to myself until about 10:30pm when someone else drove in. 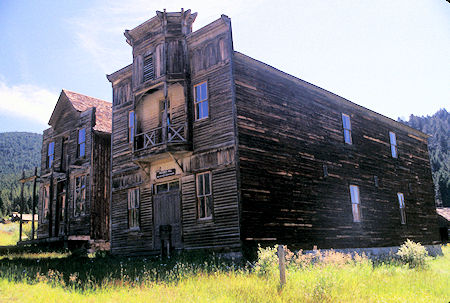 Drove north on Interstate 15 to Boulder, Montana where I mailed four rolls of film to Kodak.

Then on Montana 69 and a dirt road to the ghost town of Elkhorn, Montana.

Backcountry roads settle you into a 19th century mining landscape before you reach historic Fraternity Hall and Gillian Hall nestled within the privately owned town of Elkhorn. These two picturesque structures from the early-day silver-mining ghost town, preserved as outstanding examples of frontier architecture, have been recorded in the Historic American Buildings Survey.

Dating from the second wave of Montana's gold and silver rushes, Elkhorn has survived as one of the better ghost towns in the west. Its principal mine, the Elkhorn, was discovered around 1872 by Peter Wys, a native of Switzerland, and has changed hands repeatedly. Booming in the 1880's and '90's before tapering off in this century, the Elkhorn reputedly produced some $14 million in silver during its long life.

Many of Elkhorn's cabins have been reoccupied. The Fraternity Hall with its castellated cornices and its unique second-story outcropping and the Gilliam Hall next door are the only original buildings of interest.

Elkhorn has been designated one of the most important historical sites in the West and renovation has been undertaken by the Western Montana Ghost Town Preservation Society. Elkhorn flourished in the 1880's and 90's, when millions of dollars worth of gold and silver were mined. Reportedly the town had 2,500 residents, with 500 woodcutters, mostly of French and Norwegian descent, were employed to supply wood for the town and the mill.

Returned to Montana 69 and drove through pleasant rolling hills with fields of multiple shades of green and colorful flowers - much cultivated for hay or alfalfa.

Interesting but not spectacular mountains nearby and some snow capped ones to the south. Occasionally came in view of the Boulder River.

Eventually turned east and headed for the Lewis and Clark Caverns State Park.

Along the way I began to realize how important the railroads were to the early development of the Rocky Mountain west.

Often a river would have tracks on both sides as competing lines served the area. 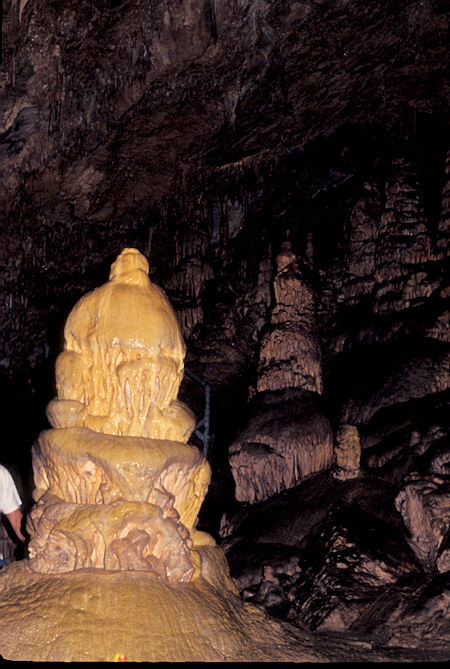 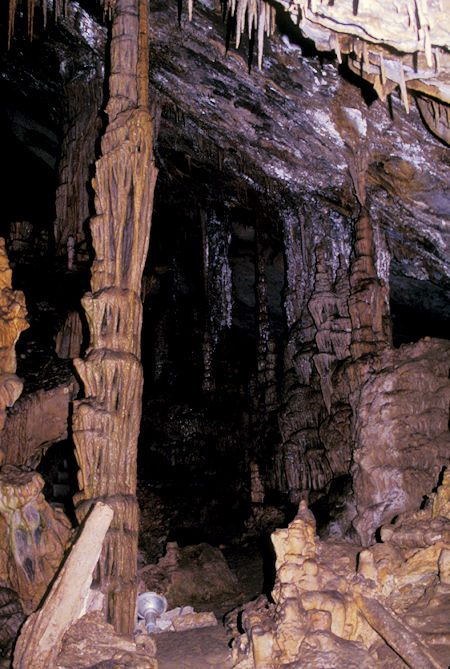 Arrived at the caverns about 1 p.m. and took the two mile two hour tour. You start out by hiking up a trail that climbs 300 feet to the entrance. We had a good and entertaining guide.

The route includes some 500 steps down and 100 up with several areas requiring bending down pretty low.

The caverns were discovered by some local ranchers and developed into a tourist attraction.

When a railroad realized that the caverns were on their property, they tried to stop the tours but were ignored.

The railroad gave the land to the U.S. government and it was declared one of the early National Monuments but no effort was made to develop the area.

The monument was managed by the Superintendent at Yellowstone who put locked gates on the entrance and visited only once a year.

The rancher knew this so he cut off the government locks and installed his own and continued to guide tours for some 30 years.

The topography of this cavern is more interesting than the Lehman Caves but the internal formations are not quite as impressive.

Back in the 60's many formations were given names which the guide exploited in a grand and humorous way.

We had a loving couple soap opera, Kermit the frog, an alligator that got stalacwarts from touching Kermit...

In my tour group was a man and wife named John and Nancy Riley who are friends of Al Hart who has a cabin at Toms Place and who Don Stansifer knew through ham radio - small world.

We entered the cavern in hot sunshine and exited to brewing thunderclouds.

I returned to MT 69, then MT 55, then MT 287 to Sheridan, MT and headed to the Mill Creek USFS campground where we got some late evening thundershowers.