Both were rescued from complete destruction by the Bovey family starting about 1945 and they restored/preserved many buildings.

The historic stuff was purchased this year (1997) by the State of Montana. 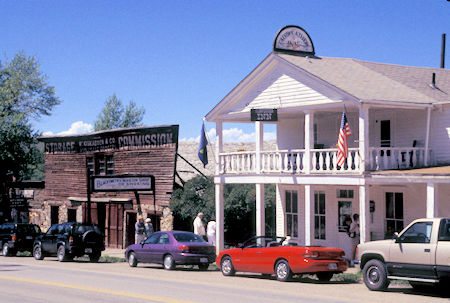 Virginia City was once the capital of Montana Territory.

All the historic structures are along the main street which is also the highway so there are lots of cars and people.

Numerous buildings are functioning commercial establishments - some in historic buildings.

Other structures are just historic with or without internal displays of appropriate furnishings.

All the historic stuff is part of a National Historic Site.

I really enjoyed Nevada City more. It has essentially no commercial operation and the "town" is simply a historic display inside a fenced area.

Most of the buildings are original to Nevada City but some historic structures from other nearby towns have been moved in.

There is a two story outhouse at the back of the hotel.

There is also a well preserved "mansion" here - really just a normal house - but it and many other buildings have appropriate furnishing and you can go inside many of them. 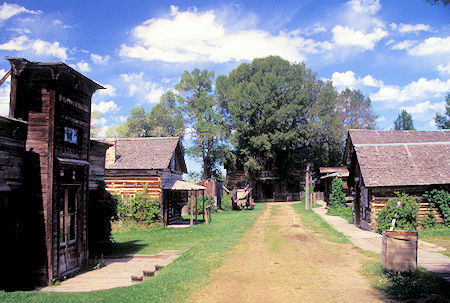 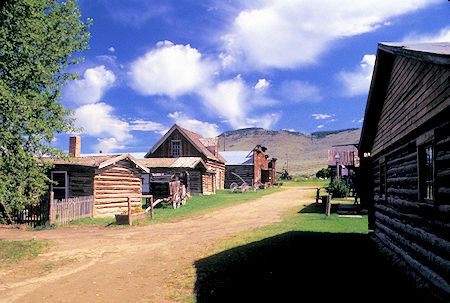 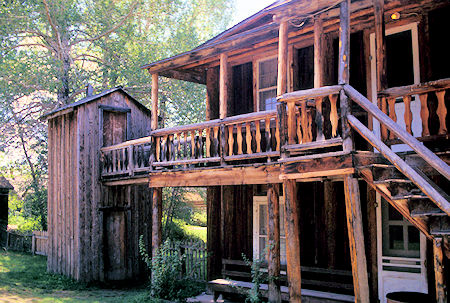 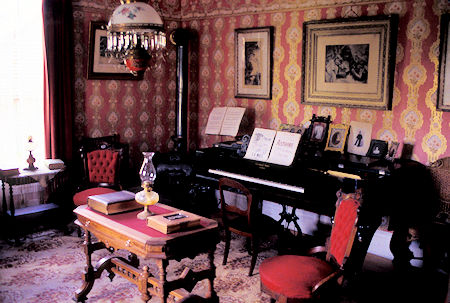 There is also a bunch of old railroad stuff and a small dredge at Nevada City.

About five different dredges worked various parts of this valley over the years and were some of the most successful gold recovery operations of that era.

I did the walking tour in both towns - Nevada City first - then continued east on MT 287 to Ennis, MT than south on MT 287 along the Madison River complete with slowly developing "ranchette" subdivisions. Some rugged mountains were to the east in the Madison Range.

I continued to the Earthquake Lake Visitor Center.

In 1959 a 7.5 earthquake buried 28 people and dammed the Madison River, creating a new Lake which was named Quake Lake aka Earthquake Lake. Also known as the 1959 Hebgen Lake earthquake. More information.

As the lake was filling, the government became concerned that the earthen dike might give way at its top and cause down stream flooding and the lake might rise high enough to damage the Hebgen Lake dam upstream, also causing flooding.

They dug down 50 feet to create a spillway where the dike was thicker. This lowered the lake level and has prevented any floods.

The north shore of Hebgen lake rose 8 feet and the south shore dropped 8 feet as a huge area of earth tilted as much as 20 feet. Cabins along the north shore were covered in water and pulled into the lake. 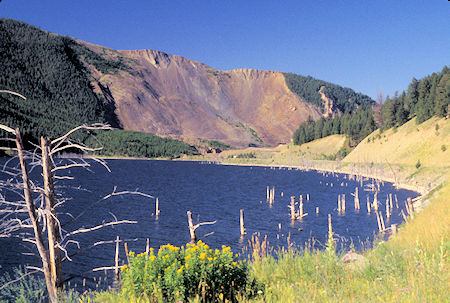 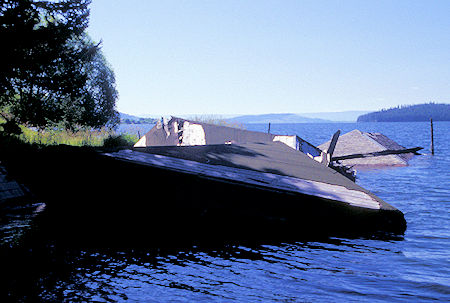 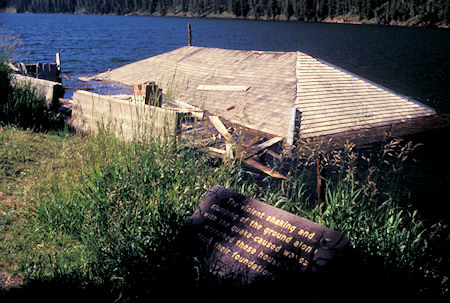 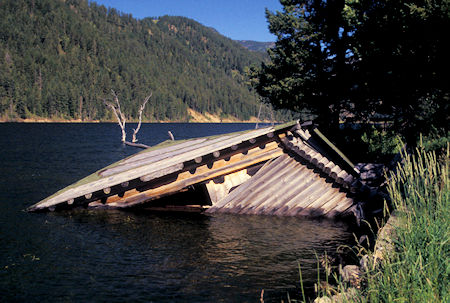 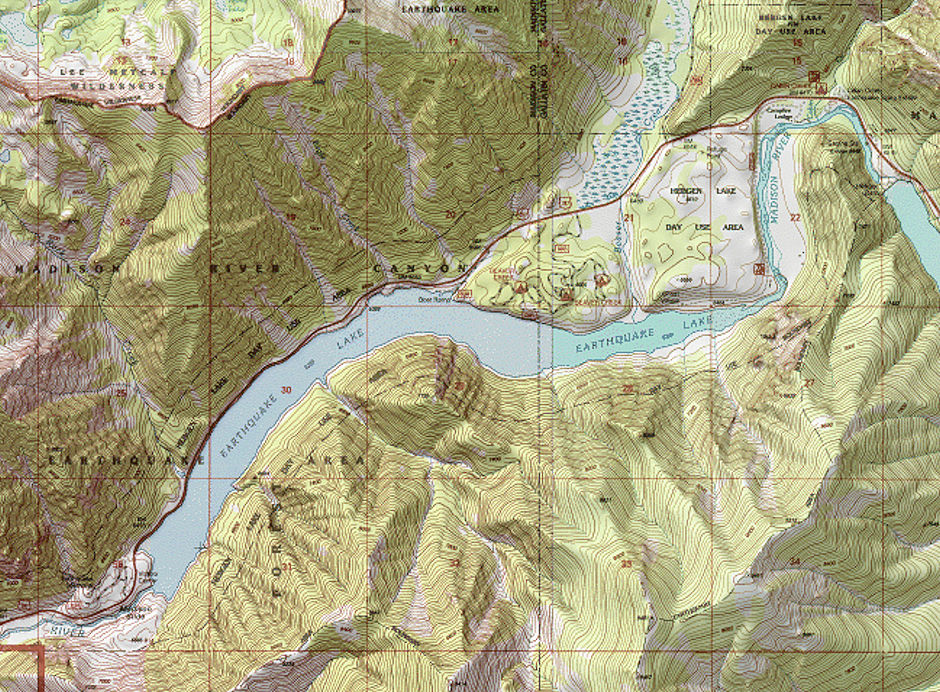 I stopped at the Beaver Creek USFS campground along the lake for the night.

Headed east on MT 287 then south to West Yellowstone and visited the Grizzly Bear Discovery attraction. Its been there three or four years.

They have live Wolves and Grizzly Bears on display in a San Diego style zoo display. No, not both in the same enclosure (grin).

Got there around eleven and the Wolves were lazing in the shade but did move around once in a while. 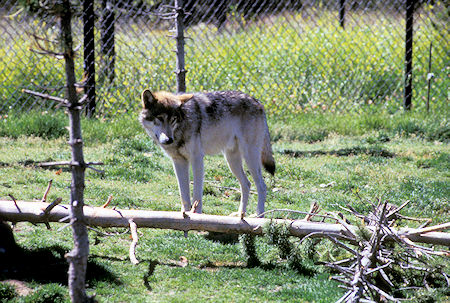 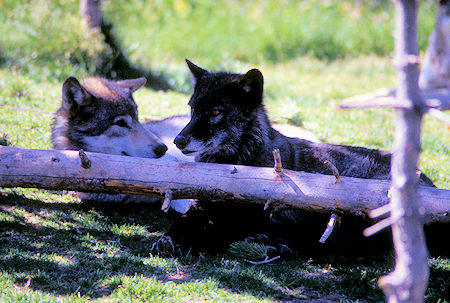 At the time I visited, they had six Grizzly bears. Two were 1.5 years old, 2 were 2.5 years old and 2 were seven years old. Over time the bear population changes. You can see the current population on their website. 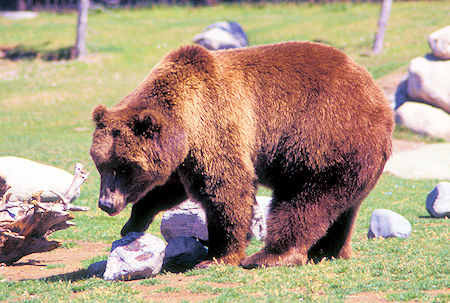 They rotate the bears on display so that at the time I visited the four young ones were out at one time, the two old ones another time.

Between times they hide food under rocks, put peanut butter on trees, etc. so the bears move around locating the food. Makes an interesting display.

They get their main food off stage. All were apparently captured in the wild.

Was very interesting to watch and photograph them with my long lens.

UPDATE 2013: Much of this facility has been re-designed with new exhibits. There is an ongoing construction program which you can learn about at their website.

I then headed north on US 191 to Bozeman, MT along the Gallatin River through a scenic corridor.

Part of the river is good kayaking and rafting. Saw some of both.

Being a Sunday the rafting outfitters were busy with lots of people floating. 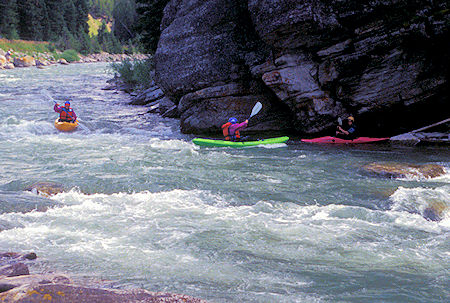 Arrived in Bozeman and got motel about 4 p.m.