This morning drove over to Medicine Lake, a nice fishing lake with several nice fee campgrounds and a large boat launch area.

Then on toward Mount Shasta with a small tour along the McCloud River where there are a couple of small waterfalls and the river is quite pretty - small - but scenic in it's own way. 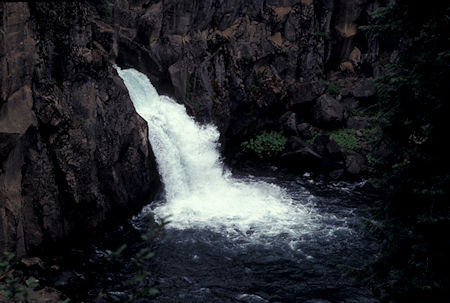 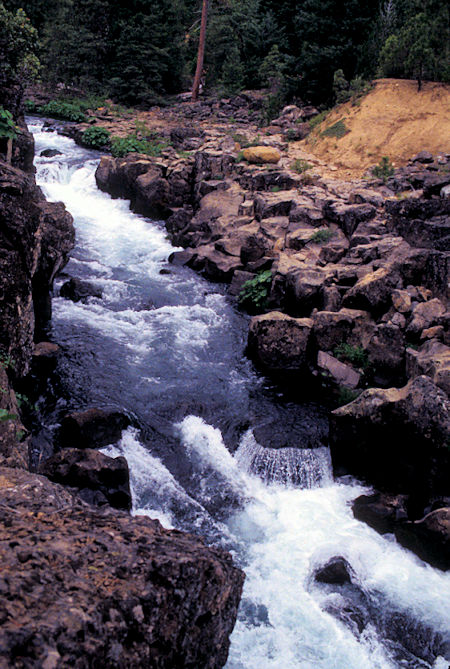 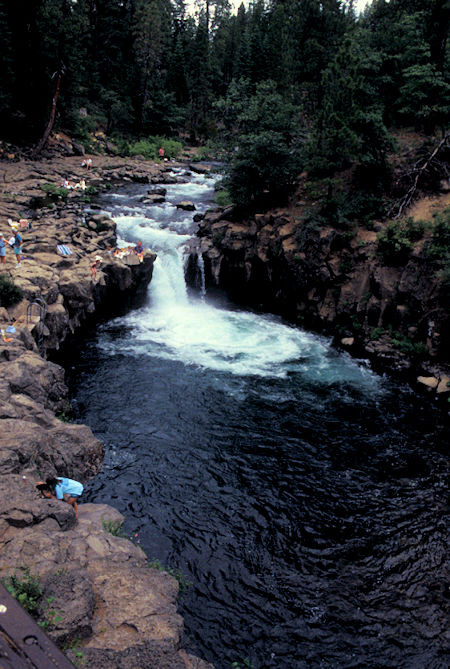 Got to town of Mount Shasta and after filling gas tank, mailing a roll of film, etc. started up the Everett Memorial Highway - as it started to rain in buckets (had been overcast most of the day).

Mount Shasta (Karuk: Úytaahkoo or "White Mountain") a potentially active volcano at the southern end of the Cascade Range in Siskiyou County, California. At an elevation of 14,179 feet, it is the second-highest peak in the Cascades and the fifth-highest in the state. The mountain and surrounding area are part of the Shasta–Trinity National Forest.

Drove as far as Bunny Flat where a number of cars and people coming off the trail indicated that the place had been busy over the weekend. The road beyond was still closed.

This United States Geological Survey Volcanic Information site has all sorts of neat information about the mountain and it's volcanic origin ... an interesting place to visit.

Drove back down to the Shasta-Trinity National Forest - McBride Spring Campground and got the next to last campsite. Eventually the sky started clearing and the sun came shining through. Tomorrow doesn't sound real promising from the weather standpoint so will see what......

Well, the morning at McBride Spring Campground turned out cloudy but I decided to hike up to the Horse Camp Sierra Club Hut - about 1.75 miles one-way. About half way it snowed a little, then cleared. Just as I rounded the turn to the hut, the sun broke out on the mountain side for some nice pictures. Enjoyed the hut and talked to some other day hikers. Others were on the mountain and a guided couple showed up before I left.

On the way down talked to a number of day hikers, most not prepared for bad weather, and a man who had gotten blown off by blizzard conditions at 13,000 feet during the storm the day before, on one of the other side routes. 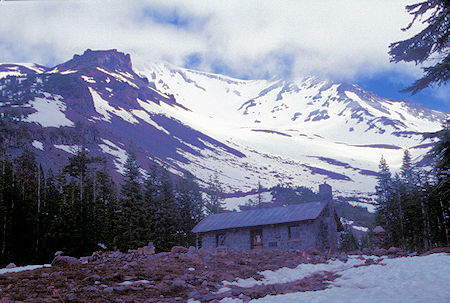 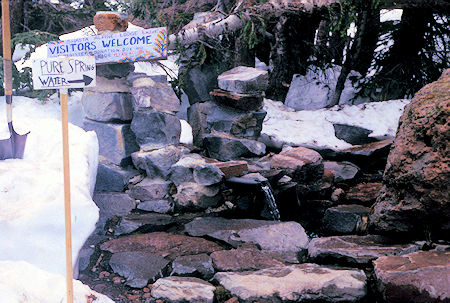 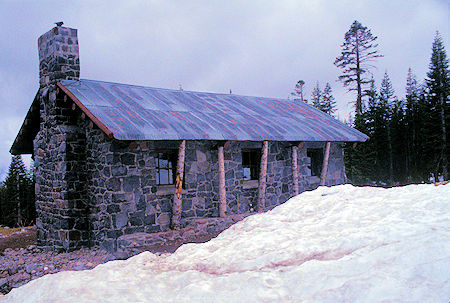 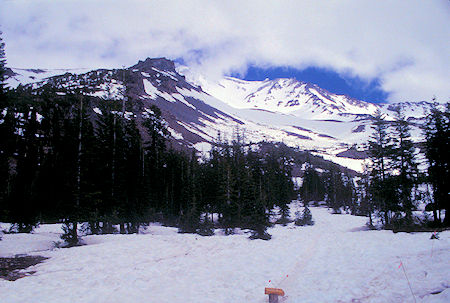 Then proceeded under cloudy skies down to Castle Crags State Park - hard to get excited about such a place after having been in the Sierra. Took a U.S. Forest Service road (USFS Route 25) across toward Trinity Lake. First 40% or so was paved one lane road, then good gravel. Met only one car and it was coming from a small community hidden back in the mountains. Some interesting forest scenery and views back at the crags. It was 30 miles, took about 3 hours at leisurely pace.

Arrived at State Highway 3 and moved into a campsite at Shasta-Trinity National Forest Cedar Creek campground.

Drove south to Trinity Lake, filled gas tank, groceries, then headed eleven miles up good gravel road to Boulder Lake trailhead in Trinity Alps Wilderness. Did three mile round trip hike to Boulder Lake - nothing special, just easy to get to. Got sprinkled on. Got back to car and ate supper. Check these sites for more information:

Still suffering from my digestive malady so took it easy at the trailhead the next day.

Woke the next morning encased in 150% humidity - either a fog bank or clouds - everything was damp. Drove back down to the highway and headed north on State Route 3. A beautiful drive - would have been more so with some sun. Through pretty Scott Valley and on to Yreka. Nice town of about 7000+. Got a room in Motel 6 to dry out, do laundry, recover more from malady, hope for sun, etc.

The sun came out, warmed up, drying out. From talking with locals, the "monsoon" not typical of weather this time of year.

Stayed another night in Yreka, recovering from my malady.

Headed to Weed in clear sunshine. Came around a corner on the highway and WHAP! Mount Shasta in the face.

Got off on the old highway so I could stop easier for pictures. Quite a bit of haze but I took a few as I got closer.

Weed has a totem pole and not much more. 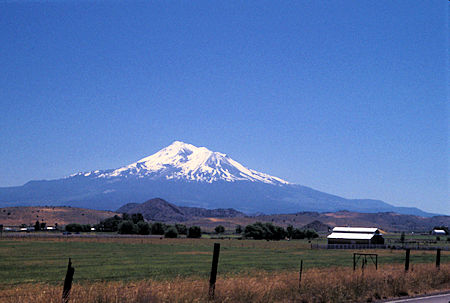 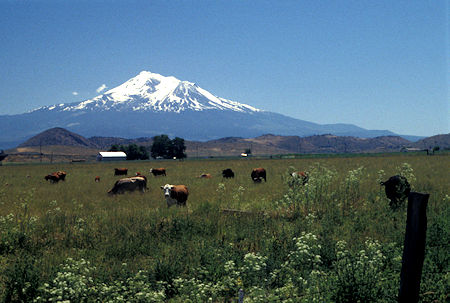 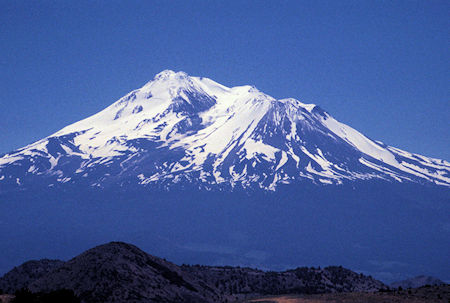 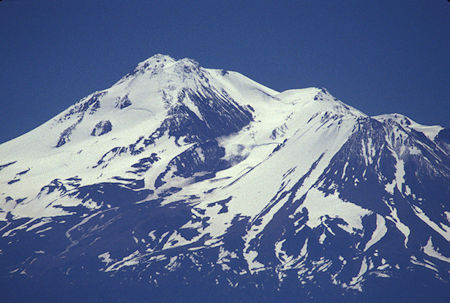 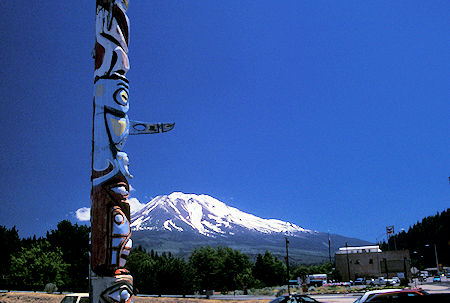 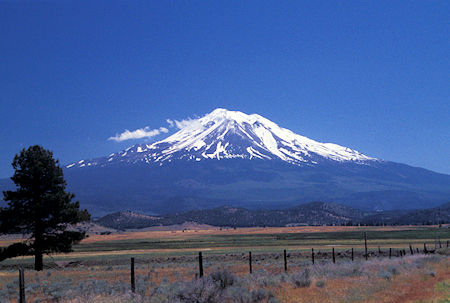 Headed to Klamath Falls, Oregon for the night. 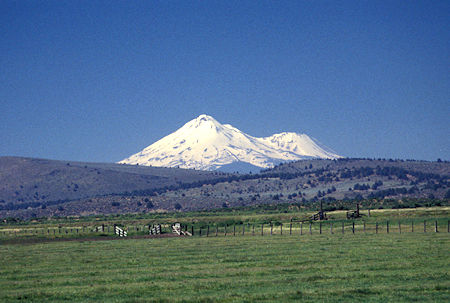 Mt. Shasta from south of Klamath Falls, Oregon off US 97 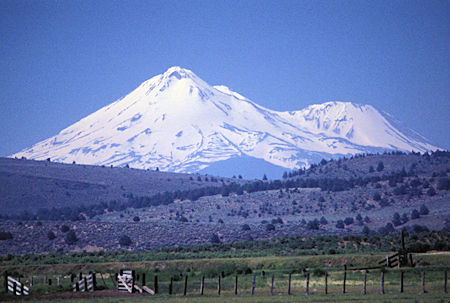 Mt. Shasta from south of Klamath Falls, Oregon off US 97

Stayed another night in Klamath Falls recovering from my malady.