I visited Crater Lake National Park in 1996 and 1998. This page combines the information for both visits.

In 1996 I had visited the park in June and the east rim road was closed by snow. In 1998 it was the end of August so I was able to drive the east rim and get all the great views from that side.

On both trips the lake is fantastically BLUE and I had excellent weather making for great visits.

On both trips I stayed at the park campground.

Mount Mazama grew for almost half a million years. 7,700 years ago, it erupted violently, then collapsed into itself, leaving behind a six mile wide caldera.

Today, the base of Mount Mazama contains Crater Lake, filled by rain and snow, the deepest lake in the United States, more than 1900 feet deep. Other eruptions have created features including Wizard Island.

Information on the geology here and here (PDF).

For more than 100 years, scientists have sought to unravel the remarkable story of Crater Lake’s formation.

Before Crater Lake came into existence, a cluster of volcanoes dominated the landscape. This cluster, called Mount Mazama (for the Portland, Oregon, climbing club the Mazamas), was destroyed during an enormous explosive eruption 7,700 years ago.

So much molten rock was expelled that the summit area collapsed during the eruption to form a large volcanic depression, or caldera. Subsequent smaller eruptions occurred as water began to fill the caldera to eventually form the deepest lake in the United States.

Decades of detailed scientific studies of Mount Mazama and new maps of the floor of Crater Lake reveal stunning details of the volcano’s eruptive history and identify potential hazards from future eruptions and earthquakes.

When Clarence Dutton of the U.S. Geological Survey (USGS) visited Crater Lake, Oregon in 1886, he was awestruck by its amazing beauty: "as the visitor reaches the brink of the cliff, he suddenly sees below him an expanse of ultramarine blue of a richness and intensity which he has probably never seen before, and will not be likely to see again."

He spent nearly a month sounding the depths of the lake from a rowboat, wondering at the forces that could create such a magnificent landscape. In the more than 100 years since Dutton’s first survey, scientists have steadily unraveled the mystery of the formation of Crater Lake and with it the demise of Mount Mazama.

Mount Mazama was formed over a period of nearly half a million years by a succession of overlapping volcanoes. The first eruptions about 420,000 years ago built Mount Scott, located just east of Crater Lake.

Over the next several hundred thousand years, Mount Scott and other nearby volcanoes became extinct, while new volcanoes grew to the west. Layers of lava flows from these volcanoes are visible in the caldera walls and in landmarks along the south rim of Crater Lake, including Applegate and Garfield Peaks.

During the growth of Mount Mazama, glaciers repeatedly carved out classic U-shaped valleys. Some were filled with lava from later eruptions, while others, such as Kerr Notch and Sun Notch, were not.

By about 30,000 years ago, Mount Mazama began to generate increasingly explosive eruptions that were followed by thick flows of silica-rich lava, an outward sign of the slow accumulation of a large volume of highly explosive magma deep beneath the volcano.

Within 200 years of the eruption at Llao Rock, another thick lava flow erupted near present-day Cleetwood Cove. These eruptions reached a peak 7,700 years ago in the largest explosive eruption in the Cascades during the past 1 million years.

The cataclysmic eruption of Mount Mazama 7,700 years ago started from a single vent on the northeast side of the volcano as a towering column of pumice and ash that reached some 30 miles high. Winds carried the ash across much of the Pacific Northwest and parts of southern Canada.

So much magma erupted that the volcano began to collapse in on itself. As the summit collapsed, circular cracks opened up around the peak. More magma erupted through these cracks to race down the slopes as pyroclastic flows.

Deposits from these flows partially filled the valleys around Mount Mazama with up to 300 feet of pumice and ash. As more magma was erupted, the collapse progressed until the dust settled to reveal a volcanic depression, called a caldera, 5 miles in diameter and one mile deep.

After the collapse of the summit of the volcano, the caldera filled with water to form Crater Lake
(Photo by Willie Scott, USGS)

Details of features beneath the surface of Crater Lake constructed using data from the 2000 bathymetry survey.
Colors range from orange to blue with increasing water depth.

Soon after the cataclysmic eruption, eruptions from new vents within the caldera built the base of Wizard Island and the central platform. As eruptions continued, rain and snowmelt also began to fill the caldera.

For the next few hundred years, eruptions from these new vents kept pace above the rising water level. Lava flowed into the deepening lake, creating benches on the flanks of the growing cones that tell scientists how deep the lake was during these eruptions.

One set of eruptions from a crater on the west edge of the central platform formed lava tubes or channels that sent lava far out onto the caldera floor.

The ever-deepening lake eventually drowned the central platform volcano as well. Only Wizard Island managed to grow high enough to stay above the waterline. The last eruptions at Wizard Island took place when the lake was about 260 feet lower than today.

All of this activity occurred within 750 years after the cataclysmic eruption. The water level continued to rise until reaching near present-day levels, where it encountered a thick layer of porous deposits in the northeast caldera wall. These deposits stabilize lake levels like an overflow drain in a bathtub.

Sometime after these eruptions, the Chaski Bay landslide, the top of which is still visible above the southern shore of Crater Lake, slumped into the caldera and ran up onto the edge of the central platform.

Other landslides within the caldera were deflected by the base of Wizard Island and the central platform, burying explosion craters and other features on the lake floor with even more debris.

The last known eruption at Crater Lake occurred when a small lava dome erupted under water on the east flank of the base of Wizard Island about 4,800 years ago. Since that time, the volcano has remained quiet, allowing as much as 100 feet of sediment to accumulate on the lake bottom. 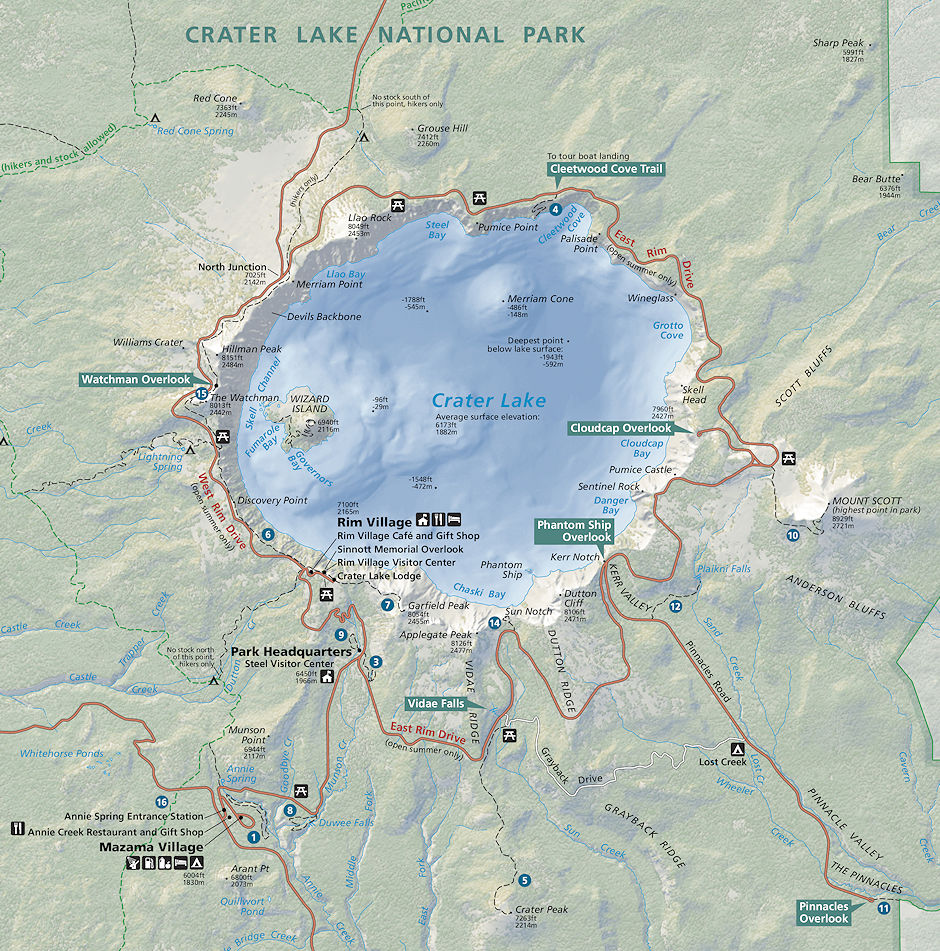 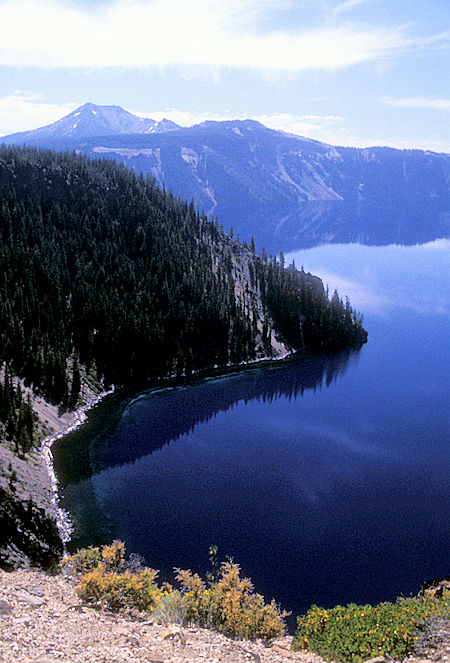 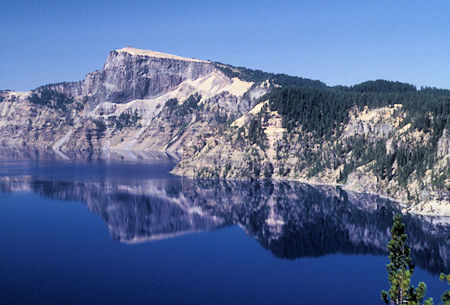 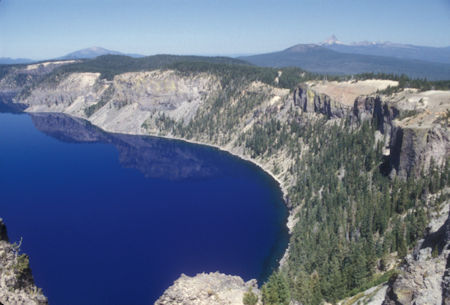 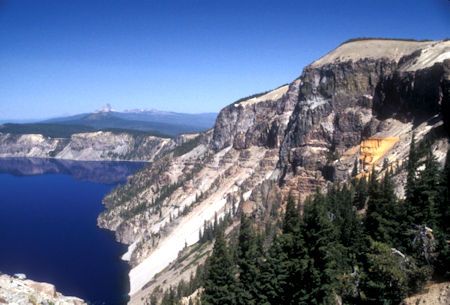 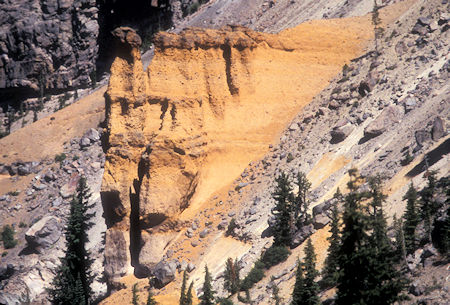 Mount Mazama, the great volcano that preceded Crater Lake, was built up by successive eruptions of lava over many thousands of years. Some lavas oozed or poured from the volcano's top or sides. Some erupted as red-hot rocks that flooded down the slopes. Others exploded into the air and fell as cinders or globs.

You can see the variety of Mount Mazama's lavas on the steep caldera wall. Pumice Castle, with its pinkish-brown "turrets," is the most eye-catching feature. It's made of layers of pumice and other rocks coughed up by Mount Mazama—some so hot they welded together.

These air fall deposits were buried and compacted by other lavas, then exposed when Mount Mazama collapsed. A firm foundation of andesite lava has kept Pumice Castle intact, while surrounding pumice deposits have eroded away. 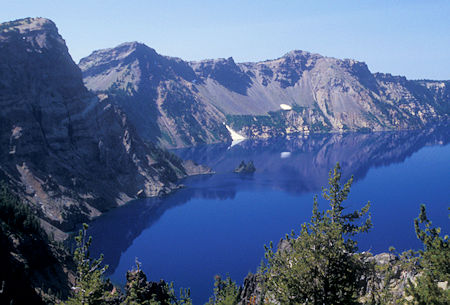 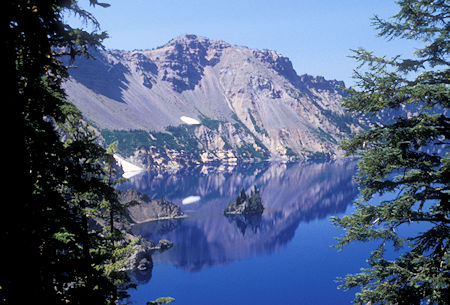 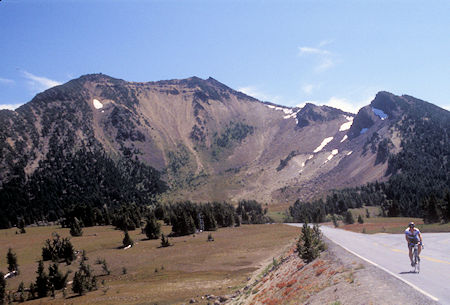 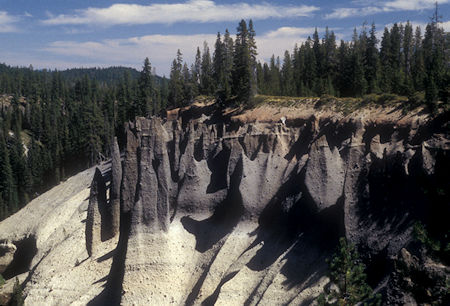 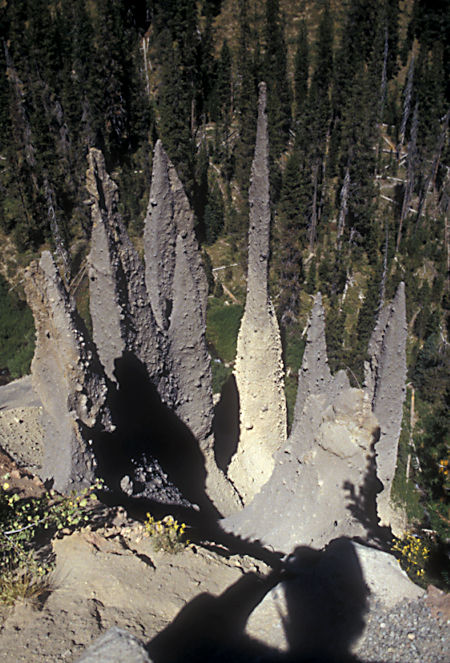 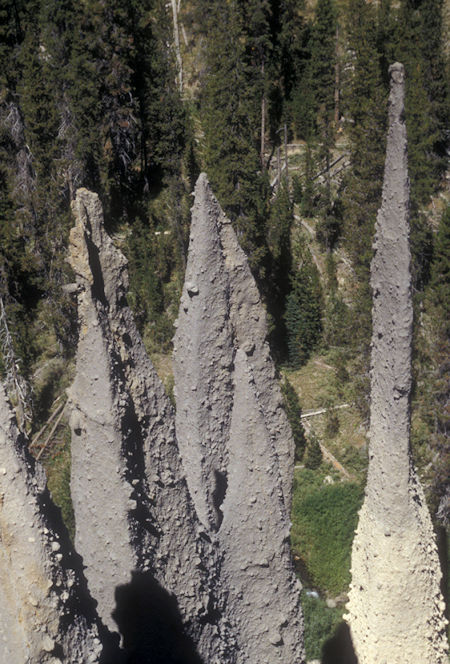 The history of the "pinnacles" began about 7,700 years ago when the eruptions of Mount Mazama were reaching their climax. Torrents of red-hot, gas-charged pumice poured down Mazama's sloped as speeds of up to 100 mph. On top of this came a flow of heavier rocks called scoria. These glowing avalanches flooded downslope for many miles, leaving deep deposits in their wake.

Temperatures in the deposits may have exceeded 750ºF. Plumes of vapors appeared, as gasses escaped from the settling rocks through vents called fumaroles. Minerals in the gasses, combined with extreme heat, welded the sides of the fumaroles in the shape of slender cones. Since then, streams have eroded a canyon through the deposits, exposing the cones. Many of these fossil fumaroles are hollow. 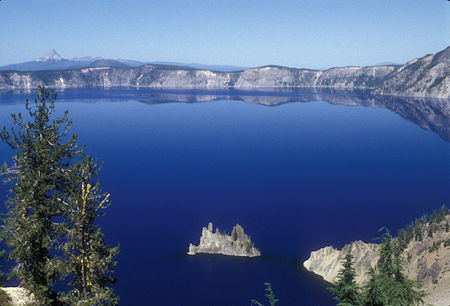 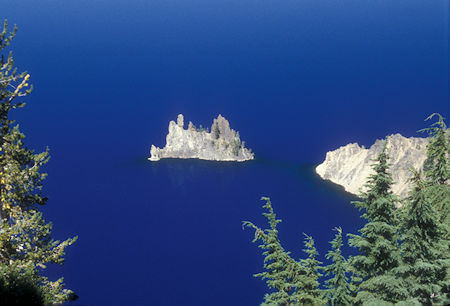 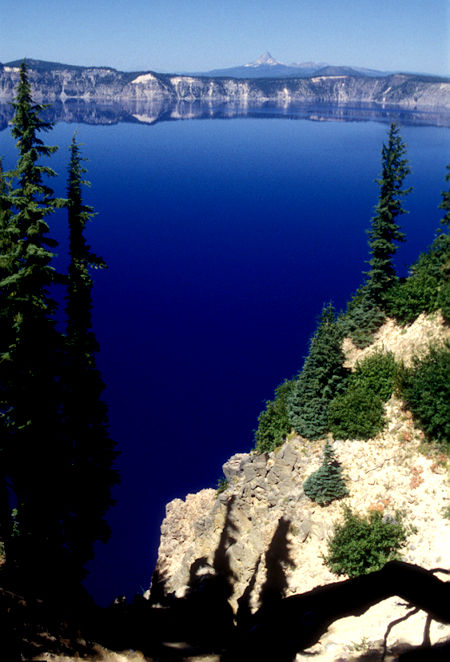