Soon arrived at CN 93, the Icefields Parkway in Banff National Park. Headed north. The day had turned into a BEAUTIFUL day. Stopped at viewpoints including Hector Lake, Crowfoot Glacier, Bow Lake, Bow Summit and Peyto Lake and Glacier. A Japanese lady grabbed me and pulled me into a picture being taken of her with Peyto Lake in the back ground. I was a foot and a half taller than she <grin>. The odd color of some lakes is the true color - a result of glacial silt.

Connecting two Canadian national parks and linking Lake Louise in the south with Jasper in the north, the Icefields Parkway is one of the top 10 scenic drives in the world. The 230-km journey through the heart of the Canadian Rocky Mountains offers the opportunity to travel through protected wildlife habitats and to witness nature at work. The area, almost as if frozen in time, allows a glimpse of a place where early European fur traders, explorers, railroaders and mountaineers used to roam. 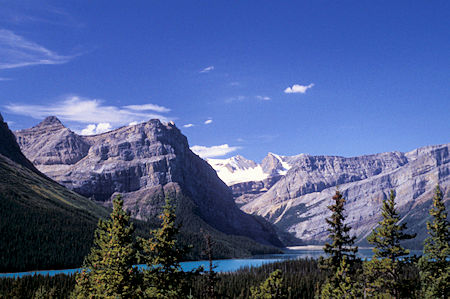 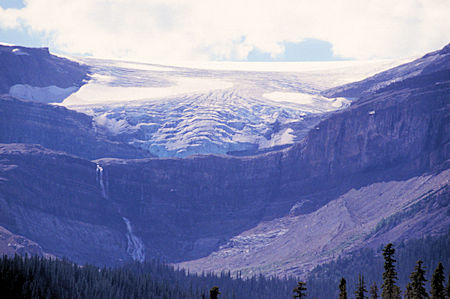 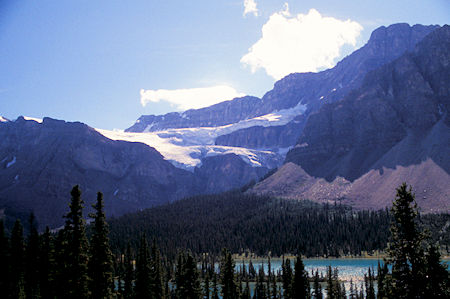 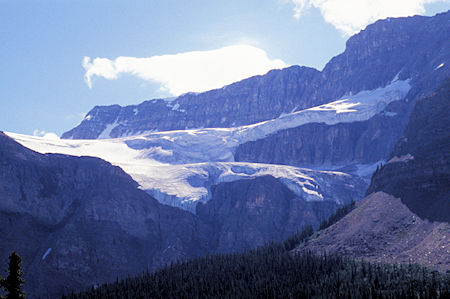 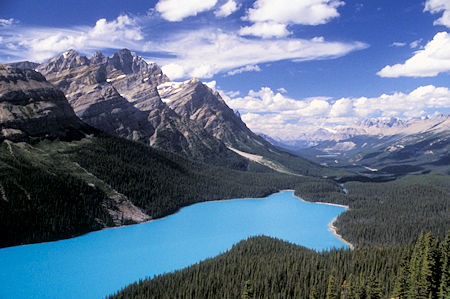 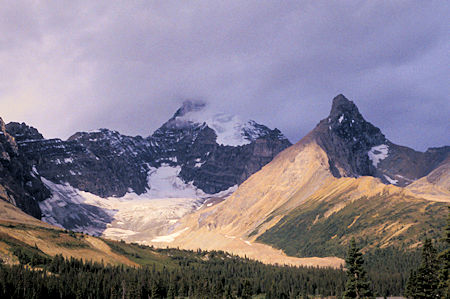 Beautiful mountains and glaciers - around every corner was another glacier. Made camp at the Rampart Creek Campground in Banff National Park south of the Columbia Icefield.

Hiked up to the snout of the Athabasca Glacier - the one they drive tour buses out on (special vehicles). Watch Movie. Decided not to take the bus ride since I already know about glaciers.

The Columbia Icefield is a surviving remnant of the thick ice mass that once mantled most of Western Canada's mountains. Lying on a wide, elevated plateau, it is the largest icefield in the Canadian Rockies. Nearly three-quarters of the park's highest peaks are located close to the icefield; ideally placed to catch much of the moisture that Pacific winds carry across the British Columbia interior. Most of this precipitation falls as snow; up to 7 metres a year!

Since more snow falls in a year than can melt during the short summer season, it accumulates. As time passes, the snow transforms into ice and begins to flow outward through gaps in the mountains surrounding the icefield, creating great tongues of ice called glaciers.

The Athabasca is the most-visited glacier on the North American continent. Its ice is in continuous motion, creeping forward at the rate of several centimeters per day. Spilling from the Columbia Icefield over three giant bedrock steps, the glacier flows down the valley like a frozen, slow-moving river. Because of a warming climate, the Athabasca Glacier has been receding or melting for the last 125 years. Losing half its volume and retreating more than 1.5 kms, the shrinking glacier has left a moonscape of rocky moraines in its wake. 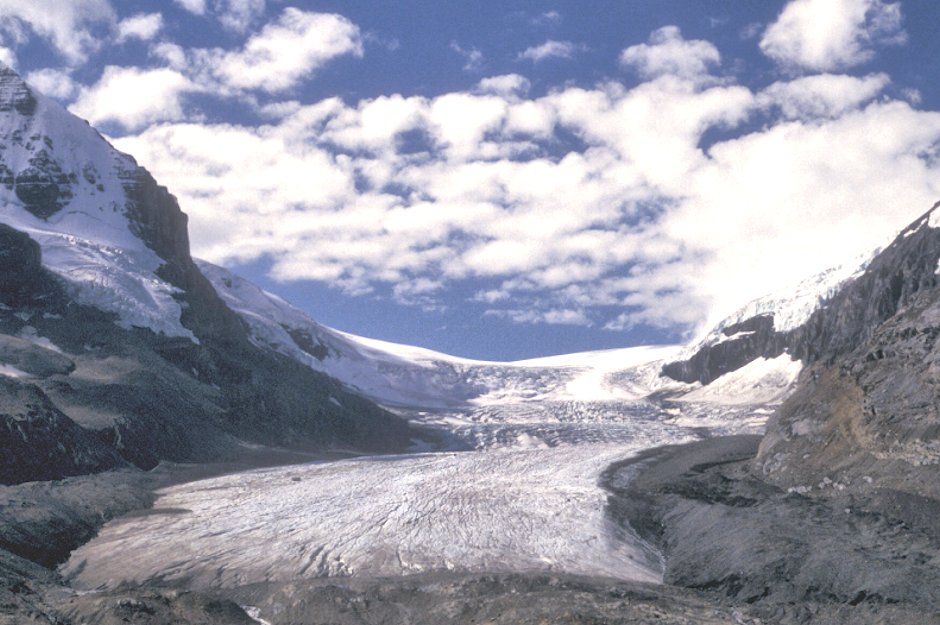 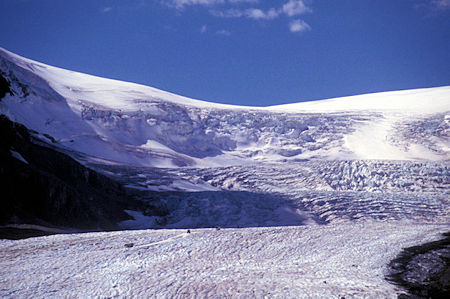 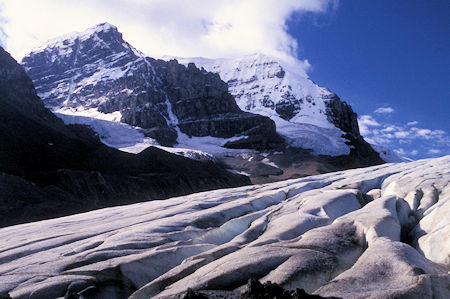 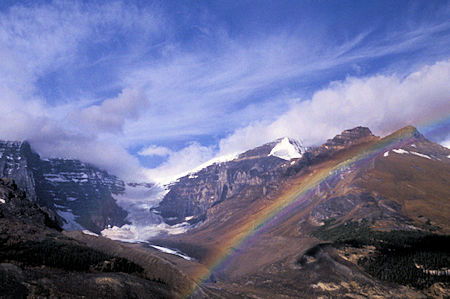 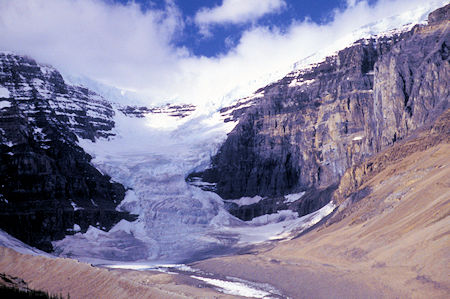 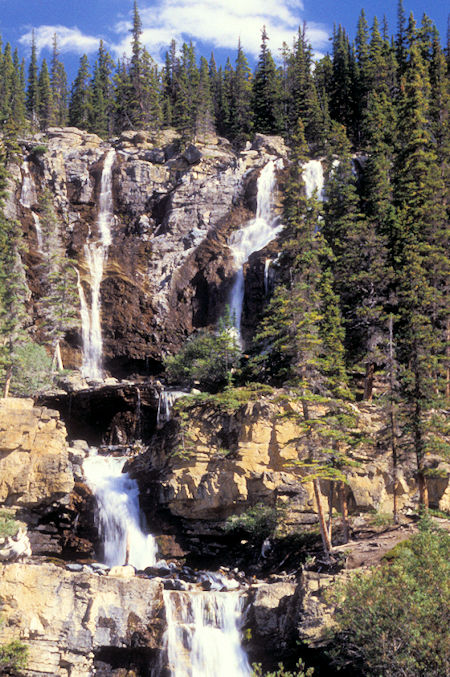 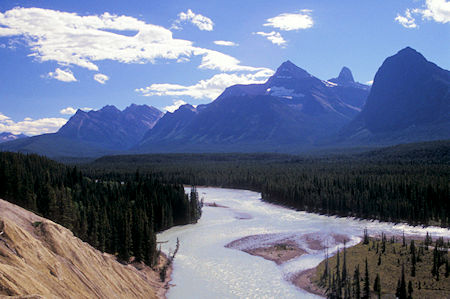 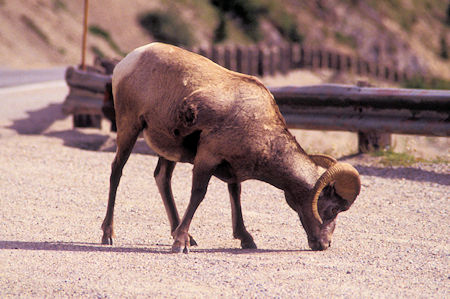 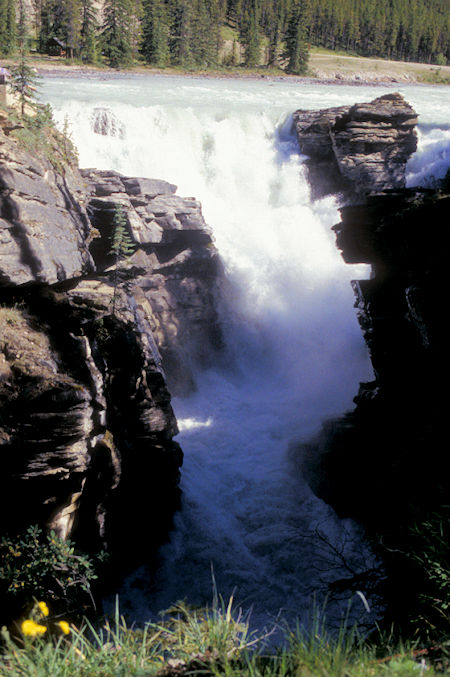 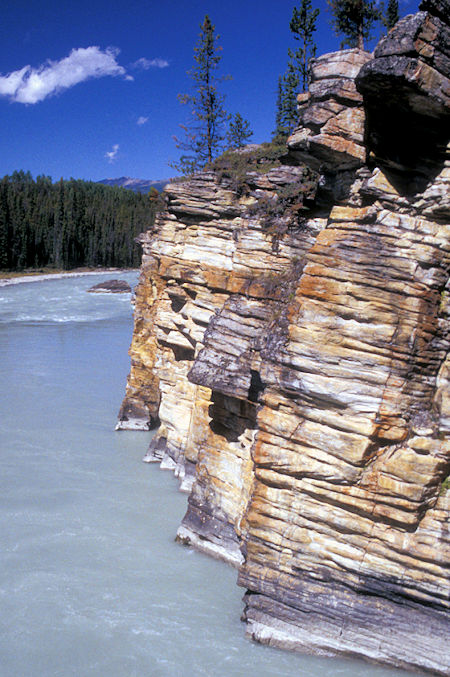 Drove out to Mt. Edith Cavell and Angel Glacier. Unfortunately it was too late in the day for good pictures. After all the other stuff I'd seen it wasn't real exciting either. The glacier WAS calving into the lake occasionally which was interesting.

Mount Edith Cavell is a mountain located in the Athabasca River and Astoria River valleys of Jasper National Park, and the most prominent peak entirely within Alberta.

The mountain was named in 1916 for Edith Cavell, an English nurse executed by the Germans during World War I for having helped Allied soldiers escape from occupied Belgium to the Netherlands, in violation of German military law. It was previously known as Mount Fitzhugh.

The hanging Angel Glacier is visible from Cavell Meadows, which spills over a 300 metres (984 ft) cliff on the north face. 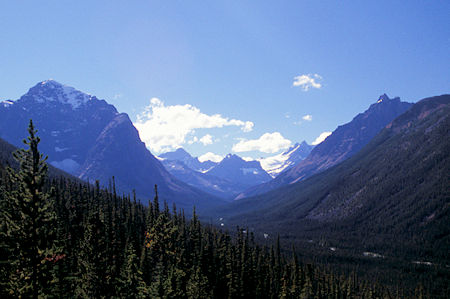 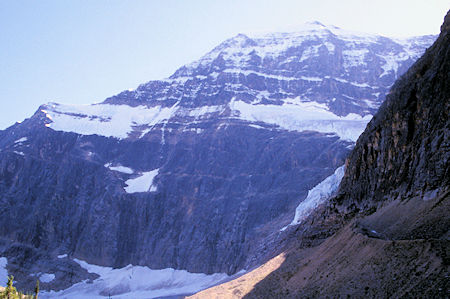 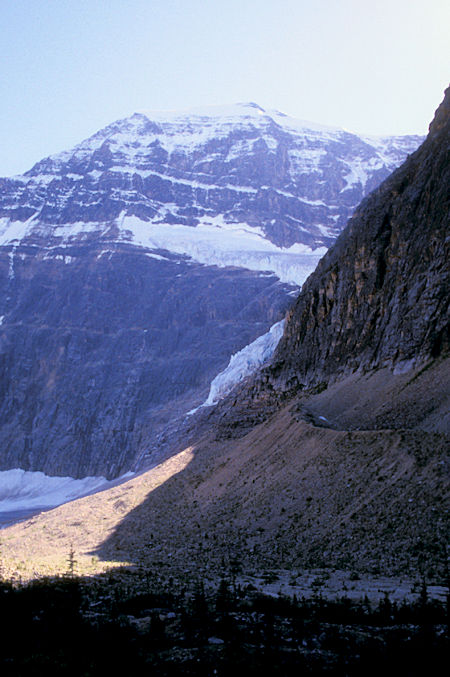 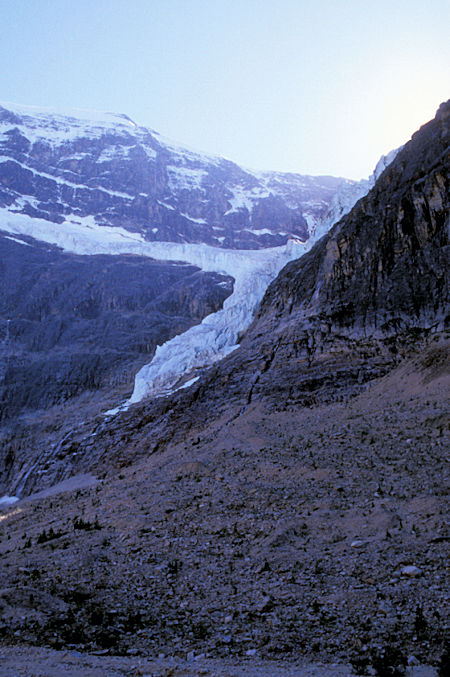 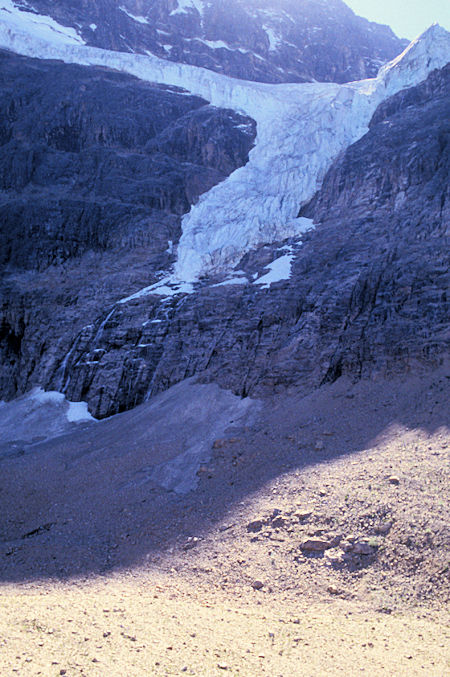 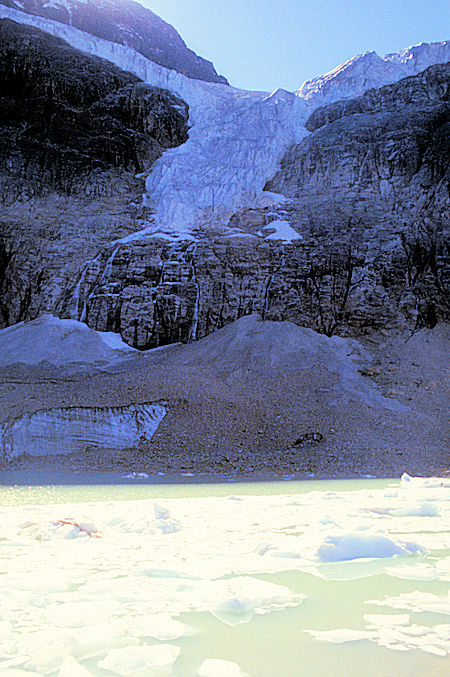 Ended a great day at the Wapiti campground in Jasper National Park just south of Jasper. Had a friendly elk at my campsite. 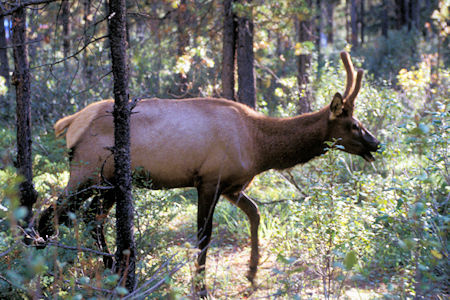 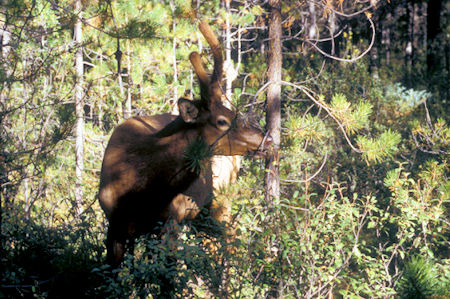 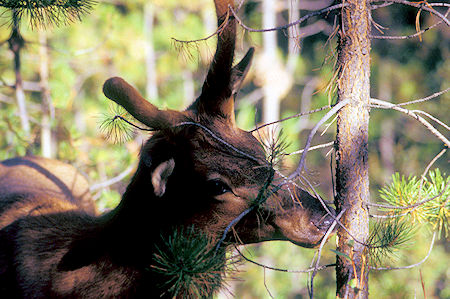 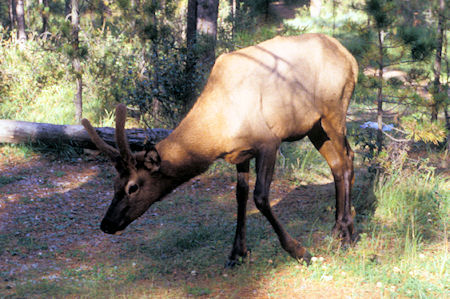