Woke to a beautiful sunny day in Bozeman, MT. Did my laundry and resupplied, then headed west on I 90, then north on US 287 to Townsend, MT, then north on MT 284 to the north end of Canyon Ferry Lake east of Helena, MT, then on county and Forest Service roads to Vigilante campground, Helena National Forest where it started to sprinkle. 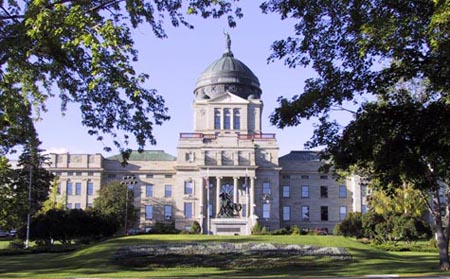 Rained off and on all night and in the morning. Took a 2 mile round trip hike up Trout Creek then drove to Helena, MT where I located a GMC dealer and got a motel.

Visited the Montana State Capitol building - historic and ornate. This virtual tour of the Capitol allows you to visit from the comfort of home.

You can take a self-guided tour.

Walked the downtown historic area. The Capitol building was sort of interesting but the rest nothing special.

Got the chariot serviced including a badly needed wash job.

Drove west on US 12 to see a place called Frontier Town. Turned out to be closed and didn't look like it was worth seeing anyway. Took dirt Forest Service roads north to Marysville, MT - another mining ghost town that has people living in it. A few interesting buildings but nothing special.

Drove east to I 15, then north on I 15 and US 287 to Augusta, MT, then west on Forest Service roads to Wood Lake campground, Lewis & Clark National Forest on the edge of the Scapegoat Wilderness. There were lots of ponds and lakes along this route and I saw many ducks. The countryside is mostly grazing land with some harvesting of hay and maybe alfalfa. 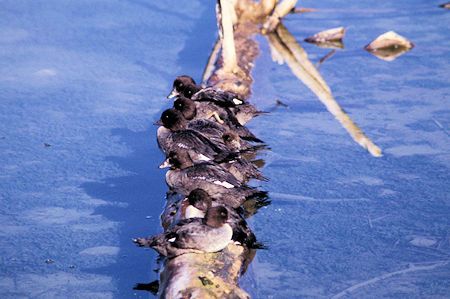 Saw a bunch of ducks on Wood Lake. Drove to the end of the road where there is a paved Forest Service airfield and ranger station called Benchmark. This country is rolling forested hills with some interesting rock outcroppings - nothing magnificent. Great horse and fishing and hunting country.

Returned to US 287 and drove north to Choteau, MT. The guy I had talked to at Hells Canyon who pointed out the Mountain Goats to me had lived here and run the nearby small ski area.

I drove west up the Teton River to the ski area. Interesting rock cliffs and peaks - nothing spectacular. Driving west on the roads into these areas made me understand why the pioneers called these the Rocky Mountains. They would have seen the rocky peaks for days as they moved west.

I returned to Choteau, MT and drove south on US 89 and County 565 to MT 200, then west on MT 200 to the Aspen Grove campground (now a group campground), Helena National Forest near Lincoln, MT. Along the way I passed Freezeout Lake State of Montana Wildlife area and saw lots of ducks and some pelicans. Mostly grazing land with some hay, alfalfa and barley. One town claimed to be the Barley capital of the world.

It rained heavily most of the night and I awoke in the clouds. Decided to wait a while and see what developed - not much point in driving when you can't see anything.

It eventually burned off so I continued west on MT 200 to MT 83. Along the way crossed Keep Cool Creek. The mountains south of Glacier National Park in the Great Bear, Bob Marshall and Scapegoat wilderness areas are rugged but not too interesting. Additional information here.

I headed north on MT 83 and got a look at the Mission Mountains from the Summit Lake overlook. These mountains had some snowfields and reminded me of the Sierra.

I drove west on Forest Service road 561 (Kraft Creek Road) to the Glacier Lake trailhead leading into the Mission Mountains Wilderness. Took the 2.5 mile round trip hike to Glacier Lake. Talked to a local man and it appears that this wilderness offers some good backpacking because of the numerous lakes. Also the western part is Flathead Indian Reservation. Tribal Website.

Glacier Lake is so close to the road that it is supposed to be day use only. There were two teenage boys at the lake who had backpacked in and had a two man rubber raft. One of the boys was on crutches - didn't see what his injury was - probably a sprained ankle or such. One of the boys was returning to shore in the raft after apparently scouting across the lake for a campsite. Lake is good sized. They loaded all their gear in the raft and headed out across the lake - just like the pioneers <grin>.